In December, the Governors Highway Safety Association (GHSA), in partnership with Responsibility.org, published a report, “High-Risk Impaired Drivers: Combating a Critical Threat.” The purpose of this report is to help state highway safety offices address this ongoing issue. 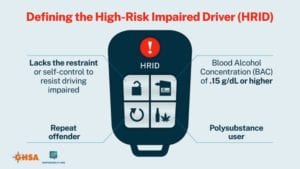 A high-risk impaired driver (HRID) is defined as a motorist who is likely driving with a blood alcohol concentration (BAC) of 0.15 g/dL or greater, to have consumed a combination of alcohol and other drugs, and/or to have multiple driving under the influence (DUI) arrests. Between 2013 and 2017, there were 384 impaired driving-related fatalities in Nevada. 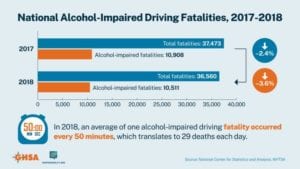 The GHSA report urges states to expand current approaches for detecting, arresting, and convicting these HRIDs. It recommends identifying and treating the root cause of the offenders’ behavior and should include screening and testing each offender for not only alcohol, but also for the presence of other drugs. These evaluations will help identify the risk levels of these offenders and determine the most effective method for reducing that risk.

Link to the report.