Changing the Way We Think About Drug-Impaired Driving

Impaired driving is expanding to include other forms of impairment, such as marijuana and opioid use, which can also affect driving and cause crashes. Governors Highway Safety Association’s (GHSA’s) Drug-Impaired Driving: Marijuana and Opioids Raise Critical Issues for States finds that in 2016, 44% of fatally-injured drivers with known drug test results tested positive for drugs, up from 28% just 10 years prior. The report discusses how these substances create driving risk, how to detect impaired drivers, and potential methods for reducing drug-impaired driving. 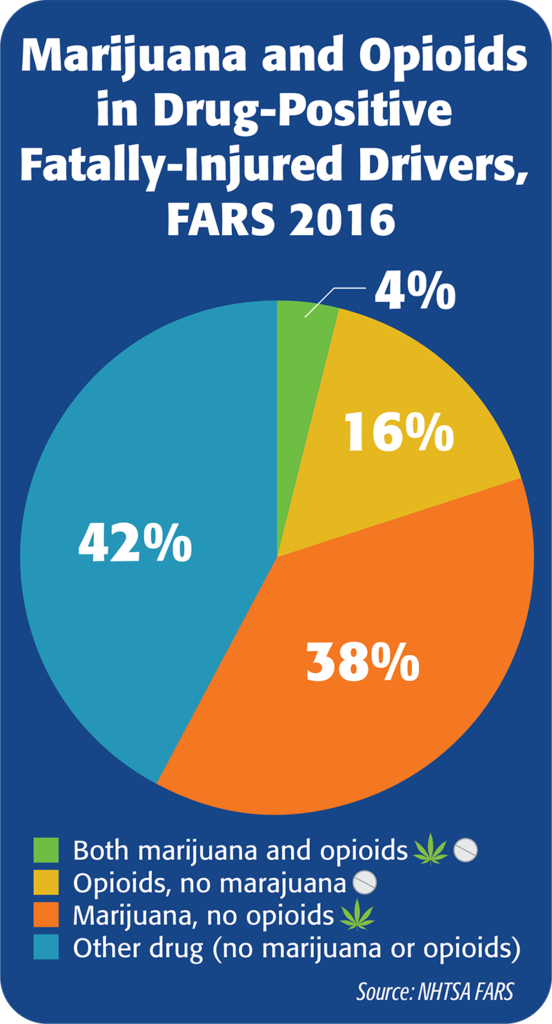 When surveyed, virtually all State Highway Safety Offices (SHSOs) agreed that drugged driving is a problem and the majority felt it was equal to or more important than driving while impaired by alcohol. Because marijuana and opioids affect drivers differently than alcohol, they will require new methods to detect impairment, prosecute offenders, and educate the public on the dangers of Driving Under the Influence of Drugs (DUID). Unfortunately, many officers have not been trained to detect impairment by drugs other than alcohol. The 16-hour Advanced Roadside Impaired Driving Enforcement (ARIDE) course provides officers with information on drug impairment, including the signs and symptoms of impairment produced by marijuana and opioids. Unfortunately, ARIDE typically is not included in basic police academy training. Therefore, not many officers have received this training. Several states would like to train more officers but lack the funding. Additionally, DUID charges are difficult to prosecute because many prosecutors and judges are not familiar with DUID cases. If a case involves both a DUID and DUI charge, prosecutors usually will bring only the DUI charge because it is easier to explain to the judge, less expensive to prosecute, and easier to prove.

In order to integrate marijuana and opioids into impaired driving programs, states will need to increase public education, roadside detection of drugs, training for law enforcement, policies and laws, and finally data to provide a more complete picture of the problem.