NDOT, RTC Break Ground On I-11 Between Las Vegas and Phoenix 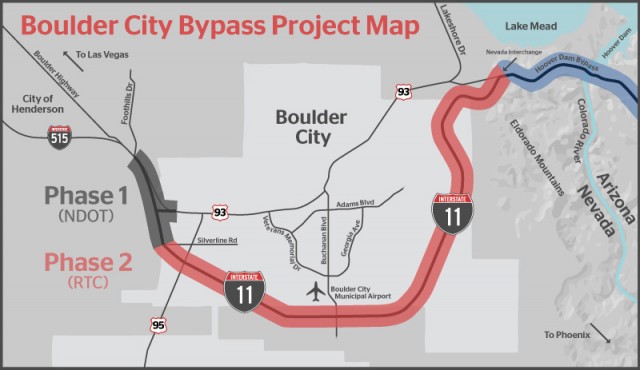 The two cities are the largest metropolitan areas in the country that currently do not have an interstate linking them. The interstate will ultimately be part of the CANAMEX corridor, providing more efficient movement of goods between Mexico and Canada.

Interstate 11 is important to the Nevada economy as well. Nearly 30 percent of Arizona tourists drive to Las Vegas, according to the Las Vegas Convention and Visitors Authority. Nearly 94 percent of the state’s products are shuttled into Southern Nevada via tractor-trailer. With additional ports opening along the coast in Mexico, truck traffic is expected to increase in coming years.

NDOT’s portion of the project stretches from Foothills Drive to the intersection of U.S. Highway 95 and U.S. Highway 93 just south of Boulder City.

NDOT’s partner on the project, the Regional Transportation Commission of Southern Nevada (RTC), is charged with completing the 13-mile sweep below Boulder City, connecting the interstate with the Mike O’Callaghan-Pat Tillman Memorial Bridge.

The new interstate is expected to alleviate traffic through Boulder City. Until 2010, when the Boulder City Bypass bridge opened, big rigs were forced to travel through Bullhead City, Ariz., to make deliveries to Nevada. The circuitous route cost more money in gas and therefore raised the price of goods. Trucks were banned from using Hoover Dam following the Sept. 11, 2001 terrorist attacks.