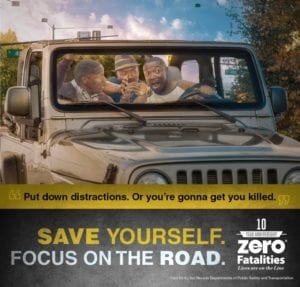 Save Yourself is the first campaign launch of the Zero Fatalities Program 10-Year Anniversary. The first phase of the Save Yourself campaign focused on three specific safety topics: distracted driving, pedestrian safety, and intersection safety. The campaign is designed to get people’s attention and eliminate unsafe behavior on our roadways by capitalizing on the current cultural climate and emphasizing personal responsibility and self-preservation. By taking this approach to traffic safety messaging, we’re asking Nevadans to do the bare minimum and save themselves, which can create a domino effect in reducing Nevada’s traffic fatality numbers, because Lives are on the Line.

In 2019, Nevada saw nine distracted driving fatalities, 62 pedestrian fatalities, and 98 intersection fatalities. These deaths were completely avoidable by simply focusing on the road, walking smart, and stopping on red. With so much out of our control this last year, Save Yourself emphasizes what is within our control, which is saving our own lives.

Zero Fatalities will implement the Save Yourself campaign messaging in a combination of paid and earned media to reach audiences in both Northern and Southern Nevada. Save Yourself media efforts include digital display ads, billboards, bus shelters, public service announcements (PSAs) on streaming services like YouTube and Hulu, and via social media content on Facebook, Twitter, LinkedIn, and Instagram.