After nearly a year-long delay, the documentary born of the 2019 #Dusk2Dawn pedestrian safety campaign premiered on March 18th. My Best Friend: A Pedestrian Story follows the awareness campaign that launched with 91 chalk body outlines on Las Vegas streets the last week of October 2019. The documentary tells the stories and chronicles the involvement of three families as they create chalk outlines at the locations where their family members were killed. The documentary serves as a cautionary tale for every road user. During the premiere, documentarian Brad Horn said he knew he wanted to tell a story about pedestrian safety but was surprised by the emotional depth of the issue. Through the haunting stories of the three lives lost, he learned how important pedestrian safety is to all road users. 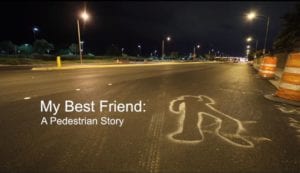