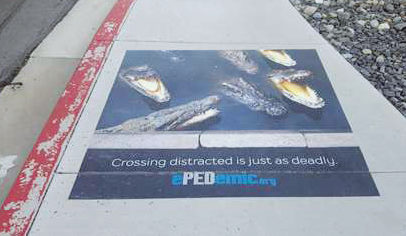 To continue to spread the message of Zero Fatalities and pedestrian safety in Nevada, NDOT (in partnership with City of Reno, City of Sparks, RTC Washoe County, Washoe County School District, and the University of Nevada, Reno) has installed pedestrian sidewalk decals around the Truckee Meadows area to remind the community of pedestrian safety. The decals are images meant to remind pedestrians that crossing roadways without paying attention can be fatal. Decals include creative imagery such as shark-infested waters with the message “Crossing distracted is just as deadly.”

NDOT states that one of the causes of pedestrian fatalities is careless behaviors, such as crossing where there is no crosswalk, not being visible to drivers, drivers not paying attention, and drivers and pedestrians failing to look out for one another.

In addition to the decals installed in various locations in the City of Las Vegas in 2016, there are now 39 new locations throughout the cities of Reno and Sparks, in the Washoe County School District, and at the University of Nevada, Reno.