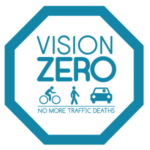 Fatalities are up in Nevada, especially for those on foot. We have committed people working diligently to stop this trend and they are looking at applying a new approach. Vision Zero (VZ) was born in Sweden twenty years ago, and is given credit for reducing fatalities in Sweden and the European Union (EU) by 90 percent!

Maybe they are on to something…Currently, 26 cities across the U.S. have also adopted VZ philosophies, with New York City (NYC) leading the way. With fatalities up across the U.S. this year, NYC, in their third year of VZ, posted their lowest numbers ever per capita for the first six months of 2017.

With this in mind, when the Vulnerable Road Users Project reached out to the mayors of Henderson, Las Vegas, and Reno to ask if they would be willing to launch programs in their downtown footprints, the responses were fast and positive.

VZ obviously shares a zero fatalities goal, but the approach is focused on making the biggest impact within urban cities. VZ looks at human frailties as a factor in road design and driver error. VZ says we don’t plan for perfect use when designing almost anything, why do we plan for perfection when designing roads?

VZ accepts that we will never stop all crashes, so we should plan for the least impact possible. In the next two months, presentations will be made in Reno and Las Vegas, asking for commitments to start a local committee to look at implementing VZ in their downtowns, and asking for further commitments in each city if the results are positive. The presentation has already been made in Henderson.

The immediate goal is to launch VZ in these cities in a statewide media event sometime in November.